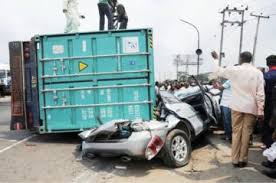 By Dipo Awojobi – The General Officer Commanding (GOC) 3 Division of the Nigerian Army, Brigadier General Muhammed Aliyu, has been involved in a ghastly auto crash along Damaturu, Maiduguri road in Yobe State with some other officers.

One General is confirmed dead with the GOC critically injured. The identity of the dead General is yet to be ascertained.