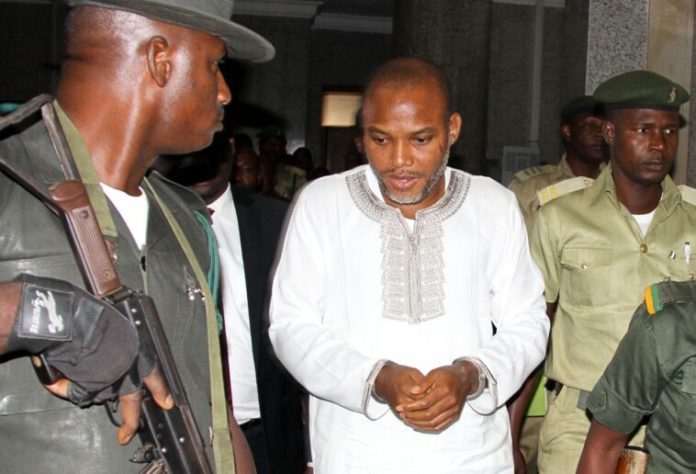 News Investigators/ The Court of Appeal in Abuja on Friday, stopped the execution of its judgment that quashed the terrorism charge and ordered the release of leader of the proscribed Indigenous People of Biafra, (IPOB) Nnamdi Kanu.
The appellate court had on Oct. 13 delivered a judgment which faulted the rendition of Mr Kanu from Kenya to Nigeria and also set aside the terrorism charges against him.
The federal government not satisfied with this judgment said that it would explore every legal avenue to quash the judgment of the appellate court and headed to the Supreme Court.
The government after appealing the appellate court’s judgment, filed a stay of execution on the grounds that releasing Mr Kanu would not be in the interest of national security.
After taking arguments from counsel, a three-member panel of justices led by Justice Haruna Tsammani on Monday, reserved ruling in the matter.
Delivering the ruling on Friday, Justice Tsammani held that the Federal Government’s application for stay of execution had merit and ordered that the execution of the judgment be put on hold.
Justice Tsammani, in the brief ruling held that the counter affidavit filed by Kanu’s legal team in opposition to the government ‘s application was misleading.
The judge said that Mr Kanu’s counsel did not properly state the facts of the matter as to warrant the court granting a stay of execution.
The court also ruled that the record of proceedings in respect of the Oct. 13 judgment be forwarded to the apex court within seven days to ensure expeditious hearing.
The Federal Government had applied that the execution of the judgment be suspended pending the hearing and determination of it’s appeal at the Supreme Court.
NAN reports that the apex court has however, not fixed a date to hear the federal government’s appeal against the appellate court’s ruling that discharged Mr Kanu and quashed the terrorism charge against him. -nan