News Investigators/ The All Progressives Congress (APC) on Thursday in Abuja, says it will give free Expression of Interest and Nomination forms to capable female aspirants in the forthcoming 2023 general elections.

She said the decision was taken to encourage capable women in the party who wanted to seek elective offices but lacked the finance.

She thanked members of the APC National Working Committee (NWC) for supporting the decision, adding that it showed that the party and its leadership was gender sensitive and poised to mainstream APC women.

She, therefore, appealed to Nigerian women to join the APC as the largest party in the country to benefit from the latest gesture.

Edu added that Sen. Abdullahi Adamu, the APC new national chairman being a gender sensitive person, had said that the party would provide a platform for women to run for elective offices in 2023.

“One of the very strong points which the chairman promised when he assumed office is that he will mainstream women and give them a seat at the table.

“He promised to ensure that we continue to be a voice and contribute our quota to the development of the party and the country,’’ she said.

She added that President Muhammadu Buhari with the support of his wife had done a lot to mainstream women generally.

The APC Women Leader described the president`s wife as a mother with conscience who had performed exceptionally well to give women a sense of belonging in the party.

She added that APC women stood for inclusion and mainstreaming of women in national politics.

“The party has gone ahead to approve that women will be running on a free nomination form in our party, before we jump, they have thrown the ball to our court.

“Before now we have women say we cannot afford the forms, we are vulnerable, we are unable.

“But now, you have been given the platform with the greatest chance of emerging as a winner of an election, because you will be running on the ticket of the ruling party.

“Not just the ruling party, but the party that has performed; a party that is gender sensitive,“ she said.

She added that the ball was now in the court of women, stressing that they must rise up and take the challenge by coming out to be actively involved.

She further added that the party was going into series of processes that would lead up to the 2023 general elections.

Edu, however, charged women to sensitise themselves on the need to get their Personal Voter Cards (PVC) from the Independent National Electoral Commission (INEC).

“We must go from door to door at the grassroots level, at every level to remind every single woman that they should register.

“We must get our PVCs ready because that is our power, that is the power of the APC women.

“Beyond that, we are going to do a lot of work, from lobbying to sensitisation to financial mobilisation for the grassroots women,’’ she said.

She said it was time for women and their families to join the APC in their hundreds, adding that the party was a mega train that was ready to take in all.

She further said that it was time for women to be mainstreamed, adding that they must come all out with dedication to deliver.

“We can’t be bought over, we are APC women, we know what we want, we will go all out, we will fight for it, and we will achieve it. This indeed is our opportunity.

“This is just the first step in a long walk, but together holding our hands, we will walk the walk, we will talk the talk and we will deliver 2023 elections as women and this is our promise.

“This is our mandate, be the support, be the strength. If a woman comes out to contest give them the support they need, don’t pull them down.

“It is already much on society, give them the support they need,’’ Edu said.

She expressed optimism that with every Nigerian woman taking her place, together women would deliver APC in the next general elections across board.-nan 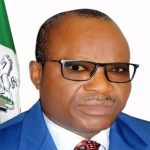