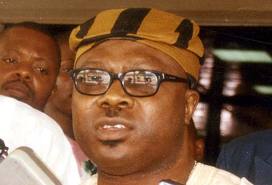 Less than twenty days to the Osun state governorship election,the All Progressive Congress on Wednesday  lost one of its top chieftain,Colonel Olayiwola Talabi (rtd) who defected with hundreds of his supporters to the People’s  Democratic Party on Wednesday.The defection which took place at Ikire ,also saw the flagbearer of the PDP ,Senator Iyiola Omisore pledging to implement immediate anti- poverty measures if elected governor in the August 9 governorship election.Announcing his defection,Talabi told the mammoth crowd at the rally that he quits APC because of its anti- people policies and the marginalization of local leaders in favor of Lagos based political actors.Lamenting the failure of the Aregbesola government to positively touch the lives of the people, Talabi said he can no longer explain to the people the many failures of the governments to fulfill its promises to the people of the state.According to him,” I quit because I am fed up with servitude ,with failed promises ,with anti- people programmes ,with bad leadership. I am now convinced that Senator Iyiola Omisore is the right man to take the state out of the present mess and rebuild it from the destruction witnessed under the APC governorship”, Talabi said.Meanwhile ,the governorship candidate of the PDP,Senator Omisore has lamented the deepening poverty crisis rocking Osun state,wondering why the people should be suffering in the midst of abundance.Responding to the Lamentations of  town people during the rally ,the governorship candidate said he emphatised with the hard time people of the state are passing through,attributing the situation to capital flight occasioned by policies of the APC government.According to Omisore,” the penchant of the APC government to service its Lagos cronies has killed local economy,impoverish the people and stifle their means of livelihood. We will boost local economy ,enhance livelihoods of the people and implement anti- poverty programmes”, the governorship candidate said.He assured those who decamped into the party that what sent them out of APC will not happen in PDP,explaining that a PDP government under his leadership will be people centered and people oriented.