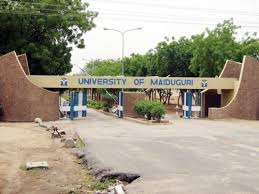 By Sadiq Umar – Another suicide bomber on Saturday detonated his improvised Explosive Device (IED) outside the perimeter fencing of the University of Maiduguri, Borno state, killing only himself in the incident.

This is coming barely 48 hours after three suicide bombers attacked the University.

Reports said the bomber who hid near the university’s Secondary School detonated the bomb, killing himself, when he sighted a security man coming in his direction.

It would be recalled that three male suicide-bombers were killed on Thursday while attempting to attack a female hostel in Maiduguri.

At least two bomb exploded during the attack. A student leader in the university, Comrade Abu Hanifa Babati confirmed that one of the explosion occurred around BOT Hostel which is a female hostel, PRNigeria had reported.

He said another explosion occurred around the Faculty of Veterinary Medicine. On the casualty, an emergency worker involved in the evacuation said that: “Four security men in the university, including volunteers were treated for injury they sustained as no life was lost except the killed suicide bombers.