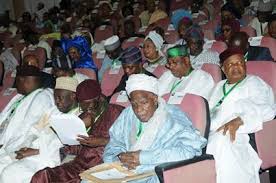 Another delegate, Alhaji Abubakar Abdulmumini representing retired police officers at the ongoing National Conference yesterday slumped at the entrance of the hall immediately after the closing of Conference.
This was just as the fisticuffs between the security agencies and photo-journalists ensued in an attempt to take the photograph of the ailing delegate.
This followed the rough handling of a cameraman of the Union Newspaper by unidentified female security details of the Civil Defence Corps who pounced on the Union photograph and smashed his camera.
Alhaji Abdulmumini was coming out of the conference hall after the closure of yesterday plenary charting with other delegates at the entrance of the hall before he slumped.
He was immediately assisted by security agents, including operatives from the State Security Service, SSS, and the National Security and Civil Defence Corps, NSCDC.
The ailing delegate was rushed into ambulance by doctors and Security agencies.
It Would be recalled that last week a female delegate, Ezenwa Ifeanyinwa,  slumped at the National Conference, shortly on his way to auditorium  after afternoon break.