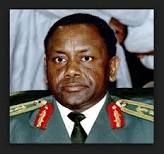 Sadiq Abubakar, son of the late military dictator responded to recent comments by Professor Wole Soyinka on the award of National Honour on his late father by President Goodluck Jonathan.

If you want to think, speak and act logically then you should know all three.

1 The law of identity

2 The law of excluded middle

3 The law of non contradiction.

Now let’s look at each one of these and see what they mean in practice.

1.The law of identity

2.  The law of excluded middle.

The law of excluded middle means that you should give a straight yes or no answer always and there is no middle ground. The law means that there is no kinda yes and kinda no, there is no ‘sort of’ being married because you are either married or you are not, you are either a thief or you are not, you are either on time or not, you are either living in Nigeria or you are not. The law is the idea that you should not try to keep all of your options open by staying in the middle or hedging, when it suits you, like when you accepted an appointment during IBB’s regime as chairman of FRSC. I bet that was a military regime you partook in. Please pick one wife and state your claim 100% to her, pick one idea and go for it 100%! Decide and commit Sir! There you might find great power and self satisfaction in the doctrine of decides and commit. No half way measures, no middle ground, exclude the middle! Here! The law of excluded middle Sir.

3.  The law of non contradiction.

The law of non contradiction says don’t contradict yourself simple. If you say you will be there then be there. If you say you will do it then do it. Don’t say or fight for one thing and then do the opposite. Don’t say one thing and then later deny that you said it. Don’t say one thing and then later contradict it. Be consistent in your thoughts and actions. Observing someone who was a socialist in the morning but then became a capitalist in the evening is a textbook on contradiction, these are two polar opposites, such a person is clearly inconsistent and is therefore considered a flip flop, confused, easily led or misled or at best a lunatic who has no clear understanding of the basis of either doctrine.

Sir, I believe brilliance is not perfection. I have grown and watched you criticize regime after regime and at that young and naive age I was thinking why wouldn’t this man just contest to be president so that Nigeria can be saved, I would have defiantly voted for Mr Soyinka if it would have brought an end to Nigeria’s woes. To my utter surprise, I heard about your FRSC leadership and how funds were misused and a great deal of it unaccounted for. “Oh my God! In the end he turned out to be just the same as everybody else” were my next thoughts. My hopes for you, all ended up in great disappointment.

Here I find myself defending my father 15 years after his death because some of you have no one else to pounce on, or rather, you have chosen a dead person to keep pouncing on over and over again when you have more than an array of contestants. A coward’s act I believe. “A common writer” is what I have heard you being referred to lately, and I believe a mature mind would now agree to such referrals. With all due respect, there is a great challenge that faces the country, we have to put our heads together, rather than clashing, our collective ships must sail in the same direction, let us leave the ghosts of past contention and face the future bravely as one, criticizing the past does not help the present or define a path to the future.

You say, with the weight of your sense of history and the authority you possess on national issues that ” a vicious usurper under whose authority the lives of an elected president and his wife were snuffed out” referring to my late father, you must be growing old, or you would rightly recall that that president elect you refer to did not die while my father was alive. Did you slyly change your facts to fit a history that would better serve your narrative, or are you just plain forgetful? Either way, it shows you are losing your grasp of reality.

Comparing my father’s leadership to Boko Haram’s current reign of terror, is a rather cheap shot, you are in no position to examine, judge and sentence an entire regime based on the information you think you have, you are privy to almost none of the true facts, what is at your disposal is at best, hearsay, or were you ever minister of defence? did you ever sit in during security meetings, evaluate the facts and subtleties of national security? You remind me of Obama criticizing the Republicans before he became a sitting president himself, vouching to put an end to all American occupation, this all came to an abrupt end once he had access to the briefs and security issues, economic and political, facing his nation. Surely he did what he could, and history will judge him. To lead is not to be a rock star, and to be a Nobel laureate is not to be a an antagonist of this countries legacy..We are Africa’s leaders, whether we like it or not, we cannot trivialize the centenary celebration, it happens only once, let us come together, if only for this one occasion and agree to disagree.

Open rebellion against the current government at this time, on the manner of the centenary celebrations, for whatever reason, is tactless, it is not about you, it is about our nation, our beloved country. There is a time and place for everything. My late father was a Nigerian, lived in Nigeria and died protecting our interests to the best of his ability, critiquing placing him on the honor roll, along with many deserving dignitaries is your right, you have the right to your own opinions, but you do not have the right to your own facts. Facts stand alone, regardless of who espouses them, let posterity judge, but you are clearly politicizing a dead issue, how could you not be? Having an issue with the naming of a hospital after the late General and leader? really ? Now ?

It almost seems as if you want to turn back the hands of time, what else would you like to undo besides the naming of the hospital, would you like to unmake Bayelsa state, Zamfara state or the others? What about the advances we made in commerce, reducing the inflation rate, what about security and welfare, how many projects, hospitals and schools were created? inflation went from 54% to 8.5%! my father oversaw an increase in our foreign currency reserves from 494 million dollars in 1993 to 9.6 billion dollars by the middle of 1997, that is unprecedented , 15 years after the PTF the benefits are still being reaped today in Nigeria, What of peace keeping and nation building, not just in West Africa but the entire continent, restoring democracy in Liberia and Sierra Leone, all these under my father’s leadership, are all these not laudable? Or would you like to undo them all. All this on 8$ per barrel of oil! You have to be kidding me.

You are a learned man, you would have to undo all your learning to knowingly wish to undo all these achievements! I will be the first to proclaim that my fathers leadership was not pitch perfect or spot free, that does not exist, maybe in utopia but not here on this earth, so let us keep our discourse set in the sphere of reality please, he deserves the award, and he did not campaign for it, let it go, Sir…and allow Nigeria to at least bask in our survival and endurance in our growing prosperity and development in these trying times. I have been accused of being an optimist, hence, I am optimistic that you will come around and accept that we can all come together and face the future together, forgive each other our wrongs while celebrating our rights, I am still an admirer of your works after all, however, I cannot and will not attempt to answer your every charge, this is not the time or place, this is a time for solidarity, if only you were wise enough to grasp this.

I applaud the patience of President Goodluck Jonathan and his composure and restraint in not having a knee jerk reaction at such a pivotal moment in our nations history, but you would mar the occasion, Sir, in the future, please pick your battles, and do better to safeguard your relevance, Enough Sir!