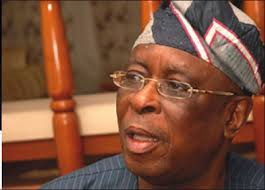 By Dipo Awojobi – A former Governor of Ogun State, Olusegun Osoba, has said both the Alake of Egbaland, Oba Adedotun Gbadebo and the Awujale of Ijebuland, Oba Sikiru Adetona, played a major role in his return to the All Progressives Congress (APC).

Osoba said he was making the clarification because many people misconstrued what happened at his Ikoyi  Lagos home last Sunday when the leaders of the APC in the South-West met there.

The former governor said this on Tuesday during the public presentation of a book, ‘Alake of Egbaland: The succession dynamics’ written by the father of the former Speaker of the House of Representatives,  Alani Bankole.

The book dwells on the intrigues and power play that greeted the emergence of Oba Gbadebo.

The former governor tacitly blamed the press for the public misconception of the meeting.

Osoba noted that discussions by the APC leaders in Yorubaland for him to return to the progressives’ fold had been on and still continued, adding that the two prominent traditional rulers had also lent their voice in that direction.

The former governor, who is the Akinrogun of Egbaland,  said the occasion of the book launch was not a time for political speech making, adding that it was better left for a later date.

He said, “There are other things that I would say about Alake but not here today because the story of what happened on Sunday when the entire APC leaders in the South-West came to me, people are making mistake that I hosted the South-West meeting.

“I appreciate the role of Alake and Awujale. So, I want to thank Kabiyesi for what happened on Sunday; he has always been with me and God will always be with you, Kabiyesi. By the grace of God, Egbaland will continue to flourish.”

It will be recalled that last Sunday, the National Leader of APC and former governor of Lagos, Asiwaju Bola Tinubu, Governor of Oyo State, Abiola Ajimobi; his Osun State counterpart, Rauf Aregbesola, Governor of Lagos State, Mr. Akinwunmi Ambode, who was represented by his deputy, Dr. Oluranti Adebule and a former Governor of Ekiti State, Otunba Niyi Adebayo, attended the meeting at Osoba’s home.

Others were a former interim National Chairman of APC, Chief Bisi Akande; the APC National Vice-Chairman, South-West, Chief Pius Akinyelure, a Senator, Gbenga Obadara and Ogun State ex-deputy governor, Prince Segun Adesegun.
But Governor Ibikunle Amosun and the leaders of the party in Ogun State were visibly absent and no explanation was given for their absence.

Osoba, who donated N500,000 to launch the book, however, took a swipe at his predecessors, Otunba Gbenga Daniel and Senator Ibikunle Amosun, for their failure to pay his severance allowance.

He also lambasted them for not replacing his driver and steward after their demise, adding that his cook who had retired had yet to be replaced.

“I thank God, I am not wretched, as God has sustained me,” he said.

And in a brief encounter with the press shortly after the book launch, Osoba said he “is a founding member of the APC and will remain a progressive politician till the end of my sojourn on earth.”

Meanwhile, the Ogun State Publicity Secretary of the APC, Sola Lawal, has said Amosun is comfortable and excited that Osoba is back to the party.