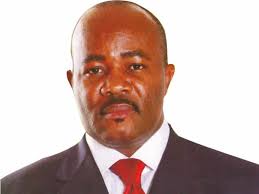 A former Governor of Akwa Ibom State, now Senate Minority Leader, Godswill Akpabio, escaped death Monday morning after his car got involved in an accident along the Airport Road in Abuja.

The accident occurred in the Central Business District at Bolingo Hotel Junction, towards the City Gate end of the airport in Abuja.

Akpabio’s convoy, it was learnt, ran into another convoy of an envoy at a traffic junction. An attempt by either Akpabio or the Diplomats’ Driver to beat the traffic light caused the accident, in which the former Governor sustained some injuries on his chest.

The former Governor has been admitted at the National Hospital for intensive medical attention.

He has also been visited by his personal Physician and his successor, incumbent Governor Udom Gabriel Emmanuel.

Hospital sources said the former governor who was moved to a private section of the hospital for X-ray and other investigations said “he might be discharged later today because he is in stable condition”.