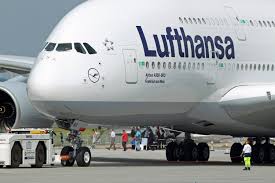 By Nuel Suji – Deutsche Lufthansa AG became the first airline to announce that it will suspend flights serving the Nigerian capital Abuja while the city’s airport is closed for repairs, rather than switch to neighbouring Kaduna town.

A report published by Bloomberg Thursday, quoted Lufthansa spokeswoman Mirjam Eberts as saying that the Lufthansa won’t take up a government proposal to divert its planes to Kaduna, a city about 140 miles (225 kilometers) away, during the six-week closure,

It indicated, however, that the Germany’s biggest carrier will continue to fly to Lagos, the commercial hub, and Port Harcourt.

Minister of Aviation Hadi Sirika had defended the decision to shut down the Nnamdi Azikiwe International Airport from March 8, insisting that what needed to be done was construction of new runway rather than repair.

Stakeholders in the industry including foreign airline operators have expressed reservations about total shut down, raising security and logistic concerns about the Kaduna option.

But aviation officials told carriers that they can fly to Kaduna during that period. About 270,000 international passengers used Abuja airport in the second quarter of last year, the most recent period for which figures are available, versus just three at Kaduna, according to Nigeria’s National Bureau of Statistics.

British Airways, owned by London-based IAG SA, said on Feb. 1 it was still deciding whether or not to fly to Kaduna.

“We doubt that the European airlines will fly to Kaduna out of concerns ranging from capacity to whether passengers can be shuttled safely between Kaduna and Abuja,” Michael Clyne, an analyst at DC Premium Logistic and Solutions Ltd., which advises companies about Nigeria, said in an e-mailed response to questions. “Kaduna experienced a kidnapping surge in 2016.”

An aircraft belonging to Lufthansa was damaged by the tarmac at Abuja’s airport earlier this year, Nigerian Transport Minister Rotimi Amaechi said last month, according to Lagos-based news website Vanguard. The runways were built to last two decades and have been in operation for 34 years, he said.