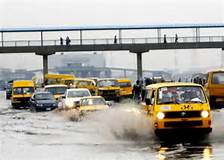 The Nigeria Hydrological Services Agency (NHISA) says five states of the country should be on ‘Red Alert’ of imminent flooding.

Mr Clement Nze, Director General of NIHSA, who made this known to newsmen at a news crronference at NIHSA headquarters on Monday in Abuja, listed the states as Edo, Delta, Rivers, Anambra and Bayelsa.

According to him, the current devastating flooding incidents ravaging parts of Adamawa, Taraba, Benue and Kogi states, and invariably cascading down to Edo, Delta, Anambra, Rivers and Bayelsa states informed the necessity of the briefing.

Nze noted that the cause of the current flooding incident is as a result of the opening of the floodgates of the Lagdo Dam managed by the Cameroonian authorities, from the 10th of October to the 31st of October.

“After several weeks of denial, the Cameroonian authorities responsible for the operation of the Lagdo Dam confirmed to NIHSA that it released water from the Dam.

“This was communicated to the NIHSA thus: In any case, it should be noted that this years is an exceptional year in terms of rainfall in the sub-region because it continued to rain up to the usual periods.

`Regarding the Lagdo Dam, the vanes were opened only around October 10, 2019 in anticipation of floods upstream, and would like to inform you that that the floodgates of the Lagado Dam have been closed for the rainy season campaign since yesterday October 31, 2019’’ he said.

He said the current development of the non-disclosure of information on the operation of the Lagdo Dam runs contrary to the spirit and letter of the Memorandum of Understanding (MoU) signed between the two countries in 2015.

“It was after the year 2012 devastating flooding incidents in Nigeria which caused the release of excess water from the Cameroonian dam that the two countries signed the MoU.

“The MoU amongst other things require that the Cameroonian authorities give adequate and prior notice to Nigeria before release of excess water downstream the dam.

“The non-existence of a dam within the Nigeria portion of the Benue sub-basin makes Nigeria vulnerable in the event of sudden or unannounced release of water from the Lagdo Dam“ he said.

Nze, therefore, said the unannounced release of water by the Cameroonian authorities will imminently have an adverse effect on Nigeria.

`Year 2012 is taken as the reference year considering the magnitude of the flood of that year.

”However, as it could be seen from the above figures, the flood level in each hydrological station as at today is far above the corresponding value in 2012’.

Nze, therefore, called on the states to be on ‘Red Alert’ to immediately identify the communities bordering the River Niger and make adequate plans for timely evacuation of people to safe and higher grounds in the event of flooding.