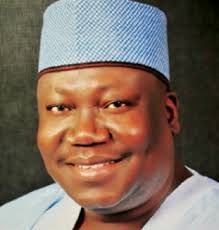 Sadiq Umar – President of the Senate, Ahmad Lawan, has departed Abuja to lead a presidential delegation to cheer Super Eagles in today’s match against Algeria in the ongoing Africa Cup of Nations (AFCON) in Egypt.

The Special Assistant to the President of the Senate on Media and Publicity, Mohammed Isa, said in a statement on Sunday in Abuja that the delegation was made up of 11 men.

The delegation includes, the Speaker of the House of Representatives, Femi Gbajabiamila, and the Secretary to the Government of the Federation, Boss Mustapha.

Others are Gov. Ifeanyi Okowa of Delta and Gov. Babajide Sanwo-Olu of Lagos States, Governor of Central Bank of Nigeria (CBN) Godwin Emefiele, and President of the Nigeria Olympic Committee (NOC), Habu Gumel.

According to the statement, “The Presence of the delegation will boost the morale of the Nigerian players and spur them to win the match.

“I am confident that our boys today will re-enact their winning streak in their determination to win the trophy and they need our support including our presence,” the statement quoted Lawan saying.