By Tom Garba, Yola – Local Government workers in Adamawa have threatened to down tools over non payment of their December 2015 and January 2016 salaries. 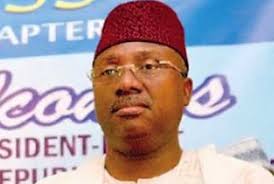 The workers officials who stormed the office of the state Commissioner for Local Government and Chieftaincy Affairs, Alhaji Mustapha Barkindo, said their patient was fast running out and that it was high time government start treating them like their counterpart (state workers) who are getting their salaries as at when due.

Chairman of the state wing of the Nigeria Union of Teachers (NUT), Comrade Dauda Maina; that of Nigeria Union of Local Government Employees (NULGE), Comrade Hammanjumba Gatigel; and that of Medical and Health Workers Union of Nigeria (MHWUN), Comrade Jeremiah Ngyakwar who spoke at the commissioners office said their members who draw their salaries from the local government level were angry with government over the two months delay.

“We should be getting our salary with state workers at the same time; we go to the same market”, Gatigel said.

He noted that some NULGE members missed out in the recent screening of workers and needed to be considered.

On his part, Ngyakwar of MHWUN said his members were owed salaries of November, December and January.

Ngyakwar urged the state governor to urgently intervene before the health sector in the rural areas of the state grind to a halt.

Responding, the Commissioner for Local Government and Chieftaincy Affairs, Alhaji Mustapha Barkindo, urged for patience, adding that government was doing everything possible to address the plight of the council workers.

“We are having sleepless nights over your problem. We are discussing with a bank to secure loan.

“We are also talking with the state House of Assembly to address the current 109 per cent deduction of council funds to 50 or 60 per cent”, Barkindo said.