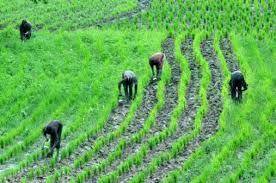 Boya made this known  in an interview with newsmen in Demsa.

Boya said that the measure was part of his council efforts to key into the present government move to boost rice production nationwide.

“The government move to boost rice production has led to rise in number of farmers going into rice production, and that prompted my council to allocate 250 hectares of land,” Boya said.

Boya who is the state chairman of Association of Local Government of Nigeria (ALGON), said that the 21 local governments of the state had procured 105 tractors to enhanced mechanized farming.

He lauded the state government support in area of subsidized fertilizer, adding that the councils were ever ready to collaborate in moving agriculture forward in the state.

The ALGON chairman also commended Gov. Muhammadu Bindow for his latest initiative of moving the State Weekly Executive Council meetings to headquarters of local government areas, adding that the measure had gone a long way in enabling the Governor to appreciate the problems at the grassroots, particularly in agricultural sector.