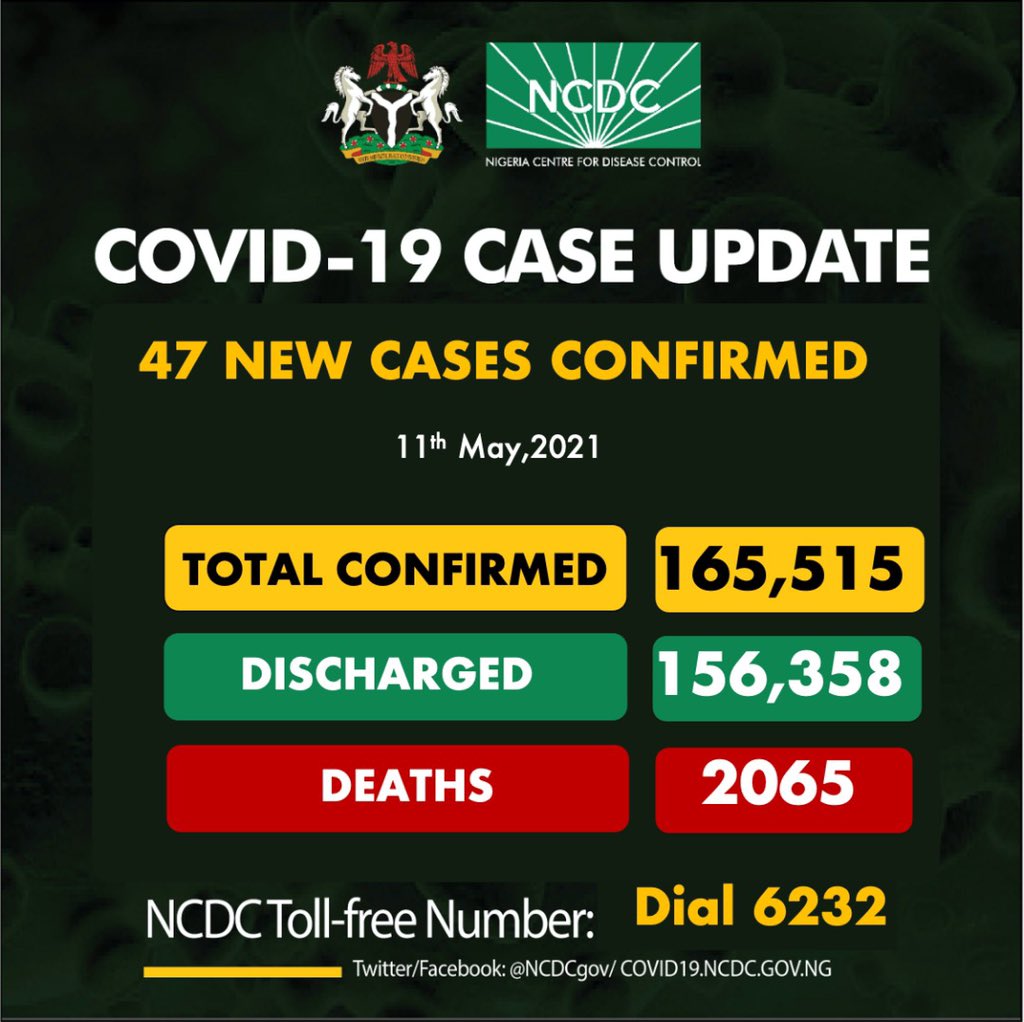 News Investigators/ The Nigeria Centre for Disease Control (NCDC) has reported 47 new cases of COVID-19, bringing the total number of infections in the country to 165,515.

The NCDC disclosed this on its official Twitter handle on Tuesday.

It stated that the 47 additional infections were recorded in six states and the Federal Capital Territory.

The agency said that Adamawa state topped the list with 19 cases, Lagos followed with 16 infections, while Enugu and Kaduna had three cases each, Akwa-Ibom, Delta and the FCT recorded two cases each.

It also announced that no person died due to COVID-19 in the past 24 hours. In total, the nation had seen 2,065 deaths related to the virus.

The public health agency said that 40 people have successfully been treated and discharged from isolation centers across the country as of Tuesday, bringing the country’s recovery number to 156,358.

It added that a multi-sectoral national emergency operations centre (EOC), activated at Level 3, continues to coordinate the national response activities.

The public health agency said that the country’s active cases stands at 7,085.

Meanwhile, the NCDC added that anti-COVID-19 vaccines work by preparing the immune system to defend the body against diseases.

“Persons who are in quarantine should endeavour to complete their quarantine period before receiving the COVID-19 vaccine,“ it advised.

The agency stressed that the government would ensure that only safe and efficacious vaccines are supplied for all phases of the vaccination campaign in the country.

The News Agency of Nigeria (NAN) reports that the Health authorities said only eligible population from 18 years and above will be vaccinated in four phases.

The current phase of vaccination covers health workers and other frontline workers although Nigerians from other groups are also getting vaccinated.

As at Tuesday, Nigeria had received 1,713, 306 vaccines, representing 85.2 per cent of the 4.1 million Oxford/Astrazeneca vaccine.

Meanwhile, the Presidential Steering Committee (PSC) has also approved the commencement of the second dose of the Oxford/Astrazeneca vaccination in all states of the federation and the FCT.-NAN