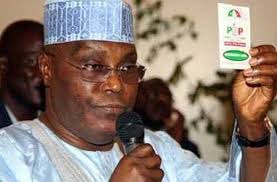 By Nuel Suji – The Adamawa chapter of All Progressives Congress (APC) has confirmed the receipt of the resignation letter from the former Vice President Atiku Abubakar who decamped last Weekend to the opposition Peoples Democratic Party (PDP).

The confirmation Sunday, three days after Atiku dumped ruling party the in Yola, the State capital.

Although, Adamawa APC Secretary Saidu Nera said he was yet to have the copy the letter, still, confirmed that the party officials in Jada 1 Ward of Jada Local Government Area where the former VP registered had acknowledged that Atiku’s letter had been received.

However, Atiku who announced his exit from the APC last Friday is said to have arrived in Yola where he is presently engaged in series of meetings with Peoples Democratic Party (PDP) leaders and officials at all levels.

According to NAN, the former VP had so far met with the Adamawa PDP executives at all level as well as the State Chairmen from the six states that constituted North East, including the National Vice Chairman North East.

He is also reported to plan to announce his defection to his old political party.

Atiku’s Spokesman Mr. Paul Ibe has refused to comment on his boss’s meeting with the PDP members as well as the speculated plan to return to the opposition party.