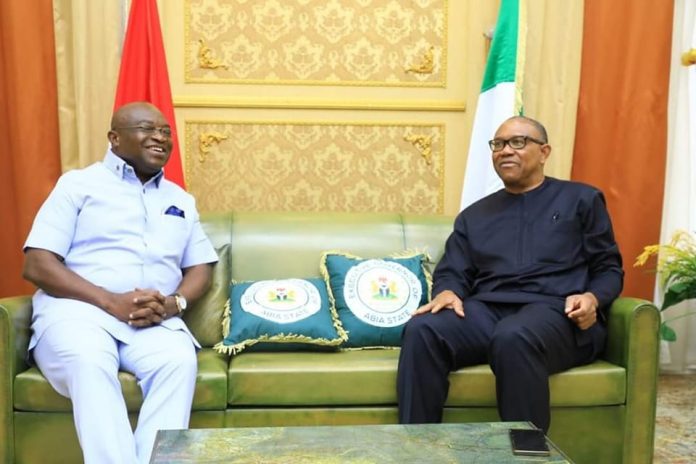 (News investigators) Abia State government has said it is not against Peter Obi’s visit to the state where he is scheduled to hold a rally on Thursday or any other presidential candidate for that matter but expressed concern that it does not want the peaceful atmosphere to be detailed.

The government in a statement on Thursday signed by the Commissioner for Information and Strategy, Barr. Eze Chikamnayo said the state Governor has a profile of political tolerance and enhancing democratic participation and will not stop the visit of Peter Obi for his political engagements.

The government, therefore, called for the maintenance of the existing peace and stability in the state and urged for proper use of the facility, even as schools remain in the section at the planned venue for the rally, the Ngwa High School Aba.

The statement read in part, “That the venue of the Proposed Rally, Ngwa High School, Aba is one of the Government Schools recently released to some Religious Institutions and other Groups on the probational basis as contained in the Executive Council Resolution authorising the exercise. Thus, the control, use, and or misuse of such privilege by any of the beneficiaries will determine Government decision as it affects such Institutions.

“Therefore, those ignorant political pretenders purporting that Ngwa High School is an independent, self-governing island within the Abia State territory are only hallucinating. Their purported approval from their misguided moles will only lead them to oblivion as there can never exist two Governments within the elected authority in Abia State.

“That all Schools in Abia operate a uniform calendar as per resumption, mid-term breaks, and conclusion of terms as approved and supervised by the Ministry of Education, Abia State. Willful alteration of the such calendar to pander to vested political interests by any Institution within the State will be met with commensurate sanctions.

“That management of Ngwa High School or any other public Institution entrusted by Government with the solemn responsibility of protecting the overall interest of Abia Children cannot recklessly purport to unilaterally discharge that responsibility without first obtaining the written approval of the government through the relevant supervising Ministry in accordance with extant laws.

“Regrettably, a certain diminutive, perennial Governorship Candidate whose questionable antecedents in the mismanagement of public institutions is common knowledge in Abia State is latching in on the genuine aspiration of Mr Peter Obi to instigate unrest and garner undeserved attention. This desperate individual together with his bitter gang of political dropouts knowing that they lack integrity, reputation and capacity are creating an erroneous impression that the goodwill enjoyed by Mr Peter Obi and other Presidential Candidates from the Government and people of Abia State can be used as a smokescreen to cover their notoriety and lack of acceptable.