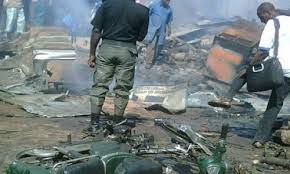 The radio station was reportedly bombed at about 8pm on Monday by some unknown gunmen who pretended to have come for commercial purpose and allowed access into the premises by the security personnel.

Four people were said to have been confirmed dead as a result of the bomb explosion.

In a statement signed by Michael Jegede, Special Assistant on Media and Publicity to Senator Abatemi-Usman, he expressed shock over the action of the bombers, describing it as despicable and unimaginable.

The Senator said the establishment of Tao FM by the renowned broadcaster and pioneer Director-General (DG) of National Broadcasting Commission (NBC), Dr. Tom Adaba, was the best thing to have happened to the people of Ebiraland, wondering why on earth anybody should think of bringing down the station.

Abatemi-Usman further stated that the radio house has since its formation been known for its balanced reportage and presentation of programmes designed to promote peace and unity in the central senatorial district of Kogi State.

He noted that the radio outfit played significant role in the peaceful conduct of the just concluded 2015 general elections via the constant sensitization of the people and opened their doors to all candidates without bias.

The Senator, however, called on security agents to leave no stone unturned in unraveling those behind the heinous and dastardly act, adding that they must not be allowed to go unpunished.

Sympathizing with the management and staff of the media organization, Abatemi-Usman prayed God to grant the family of the deceased the fortitude to bear the irreparable loss of their loved ones caused by the ugly incident.