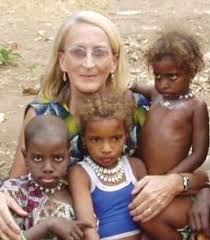 Phyllis, a missionary with Free Methodist Church at Hope Academy, a school in Emiworo village in Kogi state, that offers free education for nomadic children.

The Police Public Relations Officer in Kogi, Mr. Sola Adebayo, who confirmed the incident, said two masked armed men stormed the school premises around 10:00 am on Monday, shooting sporadically to scare away staff and students.

Adebayo. who said the kidnap was well-planned, added that the kidnappers escaped with Phyllis,  scaling the school’s fence, the same route through which they entered the premises.

He said criminals handed their victim over to other members of the gang who were waiting outside, before escaping into nearby hills surrounding the area.

Adebayo said the Police State Command have set up a rescue team in collaboration with members of the community and some Fulani herdsmen to search for her whereabout.

“Immediately the police was alerted, the commissioner dispatched officers to the location and later led a team there,” he said.

“An intensive search is on. Even the Fulani herdsmen in the community have been alerted all in the bid to ensure that she is rescued alive.