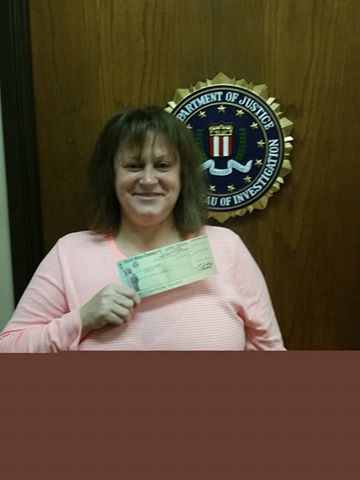 The Economic and Financial Crimes Commission (EFCC) has been commended for the recovery of $2000 for an American victim of love scam, Margaret Sanders,  just as the agency announced the recovery of $23,886 for another victim.

Sanders who lives in Sherman, Texas, made the commendation after she was presented with a cheque for the sum by agents of the Federal Bureau of Investigation, FBI, EFCC said in a statement by its media and publicity.

The anti-corruption agency said, Sanders “expressed delight at the professionalism demonstrated by the Nigerian agency in helping to recover the money which she thought she had lost to the scammer.

“The FBI agent who made the presentation lauded the cooperation with the EFCC, while explaining that the FBI only facilitated the repatriation of the money after it was recovered by the EFCC.

“Sanders met a suspected Nigerian fraudster, Benjamin Akugbe, online and fell in love with him. The scammer who claimed to be Benny Brown from Warri, Delta State, promised her marriage, and requested for the sum of $2000.00USD to enable him join her in United States of America.

“The money was wired to him through Western Union, into an account with the name, Gladys Ikpoba domiciled with a new generation bank.

“After an endless wait for the fiancé, Sanders came to the sad realisation that she had been duped. But her efforts to recover the money were unsuccessful until she petitioned the EFCC.

“The latest recovery of $23,886 by the Commission was made in similar circumstances, for Jolanta Kasza, an American based in New York. She was fleeced of $64,000 by a suspected Nigerian Fraudster, Ndekwu Jindu  (aka Dr. Daniel Coffman ) in a romance scam.

“Kasza allegedly met Coffman online in June 2012, and the fraudster introduced himself as self employed Caucasian  pharmacist.

“Impressed by the profile, Kasza “fell in love” with both agreeing to get married,” it further stated.

According to her, in the course of the affair, the suspect at different times requested for money under various guise. Before she realised that she was dealing with a con artist,  she had  lost $64,000 USD to the fraudster.

“She consequently petitioned the EFCC, which through discreet investigation recovered $23,886 USD. The agency is in the process of repatriating the fund to the victim.2