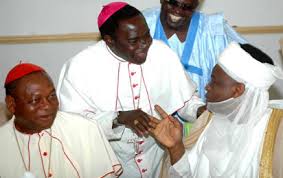 By Sadiq Umar – Determined to ensure peaceful general elections, the Sultan of Sokoto, Alhaji Muhammed Sa’ad Abubakar 111 and the Archbishop of Abuja, Cardinal John Onaiyekan will Wednesday lead religious leaders across the nation in a two day conference on role of interfaith communities during the polls.

Coming under the auspices of the General Assembly of Interfaith Dialogue Forum for Peace [IDFP], the conference slated for Abuja will also discuss the imperative of National Security in the conduct of the elections according to a Press Statement signed by the body’s Co-Chairmen, Alhaji Ishaq Kunle Sanni and Bishop Sunday Onuoha.

IDFP is a national interfaith and intercultural dialogue forum that has the peaceful co-existence of all government recognised religions as well as ethnic groups in Nigeria as its central objective.

The Statement issued weekend said other participants at the conference themed, “2019 Elections and National Security: The Role of Interfaith Communities” include the leadership of the three arms of the federal government, all state governors, the minister of Federal Capital Territory and INEC.

Other participants are heads of security agencies, traditional rulers across all the geo-political zones, chairmen of all registered political parties, labour unions, student bodies, NGOs, socio-cultural and women organisations.

Keynote addresses will be delivered by Mr. J. U. K. Igwe (SAN) and the Wazirin Katsina, Prof. Sani Lugga while all KAICIID Dialogue Centre Fellows in Nigeria will be Observers at the conference.

The Vienna based KAICCID is the only intergovernmental organisation with a Board of Directors made up of representatives from major world religions and founded by the Kingdom of Saudi Arabia, Republic of Austria and Kingdom of Spain. The Holy See is admitted as a Founding Observer to the centre.

The establishment of IDFP in February 2016 was funded and facilitated by KAICIID Dialogue Centre, Vienna in partnership and collaboration with Interfaith Mediation Centre [IMC], IPCR and Kukah Centre.