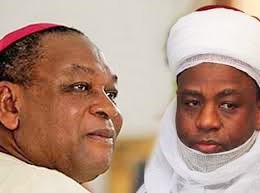 By Sadiq Umar – Ahead of the general elections scheduled for February, the Interfaith Dialogue Forum for Peace (IDFP) has called on the government to control our national borders to arrest the challenge of influx of illegal aliens.

The call is coming on the heels of the controversial appearance some delegations from the neighbouring Niger Republic at the All Progressives Congress (APC) presidential rally in Kano last week.

The body called on the Independent National Electoral Commission (INEC) to display independence and be impartial in the conduct of the 2019 General Elections.

The forum also expressed concern on the security situation in the country and urged government to take necessary actions.

IDFP made the calls in a communique jointly signed by its co-chairmen, Alh Ishaq Kunle Sanni and Bishop Sunday Onuoha.

The communique just released in Abuja was on IDFP’s General Assembly Meeting held at the Federal capital on January 16, 2019 with the theme: 2019 ELECTIONS AND NATIONAL SECURITY: THE ROLE OF INTERFAITH COMMUNITIES.

The full text of the communique read:

COMMUNIQUE OF THE INTERFAITH DIALOGUE FORUM FOR PEACE GENERAL ASSEMBLY MEETING WITH THE THEME 2019 ELECTIONS AND NATIONAL SECURITY: THE ROLE OF INTERFAITH COMMUNITIES HELD AT REIZ CONTINENTAL HOTEL, ABUJA ON JANUARY 16, 2019

The Interfaith Dialogue Forum for Peace (IDFP) was established as a national interfaith and intercultural dialogue platform through funding and facilitation of the International Dialogue Centre (KAICIID)), Vienna Austria. The IDFP was formally inaugurated on 16th January 2017 in Abuja Nigeria with 100 Christian and Islamic leaders evenly divided. The Sultan of Sokoto and the President of the Christian Association of Nigeria are the Patrons of the IDFP.

KAICIID is an intergovernmental organization that promotes dialogue to build peace in conflict areas. It does this by enhancing understanding and cooperation between people of different cultures and followers of different religions. The Centre was founded by Austria, Saudi Arabia and Spain. The Holy See is the Founding Observer. Its Board of Directors comprises prominent representatives from five major world religions (Buddhism, Christianity, Hinduism, Islam, and Judaism). The Board designs and supervises the Centre’s programmes.

This is the Communiqué of the General Assembly (GA) of the Interfaith Dialogue Forum for Peace (IDFP) at the end of its one-day meeting with the theme: “2019 Elections and National Security, the Role of Interfaith Communities”

1. That the present insecurity in the country is worrisome and alarming and call on the government to scale up their efforts to arrest the situation as the 2019 General Elections draws closer

2. As we approach the 2019 General Elections, the government should engage in massive sensitization calling on all to embrace peace and eschew violence before, during and after the elections

3. That the political, religious and traditional leaders and all relevant stakeholders should be careful in their choice of words to avoid heating up the polity.

4. That INEC should display their independence and be impartial in the conduct of the 2019 General Elections

5. That government should beef up security especially in areas ravaged by conflict and ensure that no citizen is disenfranchised owing to prevailing security challenges

6. That the security agencies should be unbiased and remain neutral while discharging their duties during the forthcoming general elections

8. That politicians should see election as a platform to serve the people and should not instigate violence in the process

9. That the media should be inclusive and practice peace journalism in their reporting of all national issues and especially on the forthcoming general elections

10. That the various communities ravaged by conflict should embrace dialogue to resolve their differences rather than revenge and promoting circle of violence

11. That the government should give serious thought to the challenge of climate change and come up with a workable policy to address it

12. That the government should do more to control our national borders to arrest the challenge of influx of illegal aliens