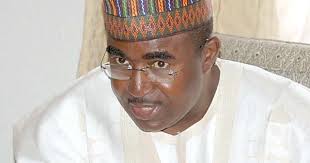 By Tom Garba/Yola – A former Presidential aspirant and erstwhile military administrator of Lagos State, Buba Marwa (rtd), has thrown his weight behind President Muhammadu Buhari for a second term of office, declaring him the best among contenders to the office.

President Buhari is yet to officially declare his intention to pursue a secnd term bid.

But Mr. Marwa told a mammoth crowd Tuesday, in Yola that Buhari remains the most credible candidate to win election come 2019 and therefore they are pledging their total loyalty and support for his second term.

The retired Brigadier General who is the convener and the founder of “Marwa Organization Support Buhari for 2019” spoke at a meeting where he addressed over 20 Non-Governmental Organisations (NGO) which pledged support for his organization. 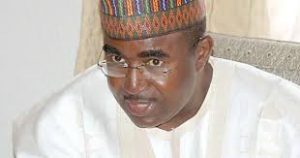 He told the gathering that the meeting is not about Adamawa State or himself but about Nigerian and the leadership of the country.

According to him Buhari has proven reasons for everyone in Nigeria to support him most especially those from the North-East region of the country.

He reminded the crowds that Buhari has fulfilled many of his campaign promises in the area of electricity, pointing also to the spread of roads construction, infrastructural development and North East Development Commission Bill that was recently passage into law.

“Buhari has done quite some remarkable achievements in releasing bailout funds to governors to settle all outstanding salaries of Nigeria workers.

“Mambila hydro-electricity power is another giants project that can boost economy of the entire country especially Northern eastern part of Nigeria where the company is situated. ” Mr. Marwa added.

Stating that, “Our stand as Marwa organization is to support Buhari to win and the decision was made after a careful consultation.

“Knowing the fact that the Buhari government has achieved a lot in the area of security and fighting corruption. He grows the economy to the extent of taken the country out of recession.” he added

He said the Buhari government’s commitment and sympathy to the plights of the downtrodden in the society has strengthened the organization’s resolve to solidly support President Buhari in 2019.

“The time is now for us to make the decision and stand by it toward 2019 presidential election,”  Mr. Marwa added.