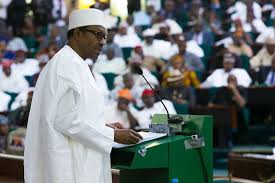 By Sadiq Umar – President Muhammadu Buhari is currently presenting the 2019 Appropriation bill to the joint session of the National Assembly amidst jeers and applause from lawmakers, even as thePresident is appealing for calm.

The budget presentation is marred by protests from aggrieved lawmakers who have vowed not to humiliate the president, with lawmakers loyal to the president resisting the protesters.

Mr. Buhari who arrived the House of Representatives chamber venue of the joint session at about 12:40p.m. was ushered in by the deputy Senate President, Ike Ekweremadu at about12:40 p.m., Wednesday

Earlier, the House had dissolved into a closed-door session where its leadership appealed for calm and understanding with the president.

Some of the federal lawmakers are not happy with Mr. Buhari over what some described unwarranted hostility and deliberate delay of releases to the National Assembly owing to tensions between the presidency and NASS leadership.

Shortly before the public gallery was opened, president’s aide on National Assembly, Ita Enang, came with the copies of the budget in a green and white package was turned back from the door.

Following the end of the Executive Session by House of Representatives, Senators were led into the green chamber by the Senate President, Bukola Saraki.

Amid cheers and boos, President Buhari to the lawmakers that “this being my last budget to the8th national assembly, the president says, I will review economic developments of the last three years, with particular reference to 2018.

“The last three and half years have been challenging both at home and abroad, he said

“The economy has recovered from recession, the president said, to which some lawmakers chanted of No, No.

“We have done more work with less resources in agriculture, and social investment”.

Mr Buhari said sustained development has been difficult with the current state of insecurity in the country.

Meanwhile, his speech is being intermittently cut by boos as lawmakers chant ‘lies’ ‘no.’

“May I appeal to the Honourable members that the world is watching us and we are supposed to be above this,” Mr. Buhari told aggrieved lawmakers.

He said the federal govt and the National Economic Council are working to forestall the lingering farmers/herders crisis.

The President saluted the armed forces for their service in battling insurgency in the north-east.