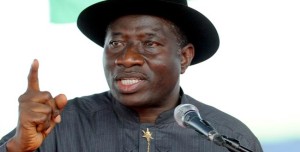 The National Coalition for Jonathan/Sambo Presidency, NACOJP, youth wing have urged President Goodluck Jonathan to indicate interest in the 2015 presidential election within the next 45-days or face their wrath.

The youths said Jonathan need to urgently indicate his interest to re-contest without further delay, assuring him that they are prepared to resist any attempt to intimidate him out of the race.

NACOJP’s President, Comrade Godspower Denema, who spoke at the inauguration of the leadership of the group, in Abuja said Jonathan must contest and that the youths are resolute in their support for him. “We call on President Jonathan to, within 45 days, make his intention to contest the 2015 presidency known to Nigerians,” he said.

A statement by the group said Jonathan must be compelled to continue his transformation agenda, arguing that the program had impacted positively on the lives of the citizens.

At the occasion, a security and safety expert, Dr. Benjamin Onoriode Irikefe, was inaugurated as the national patron of the group.

The event was conducted by former governor of Zamfara State and chairman of the Board of Trustees, BoT of the group, Alhaji Mahmud Aliyu Shinkafi.

Demena said, “On behalf of the entire youths of Nigeria, I want to sincerely warn that if Mr. President refuses to contest the 2015 presidential election, the youths of Nigeria from the six geopolitical zones of the country will be forced to take some drastic actions.”

“Some of the action may include but not limited to the shutdown of the entire country. More than 40 million Nigerian youths will storm Abuja in early February. We shall conscript Mr. President. We shall make sure that no Jonathan, no election in 2015 and most Nigerian youths shall change their national tags.”

Also, in his remarks, Irikefe asked Jonathan not to succumb to intimidation over the 2015 presidential election, adding that those opposed to his re-election were “enemies of the country, adding that Jonathan deserved re-election in view of his “sterling performance in the ongoing first term.”

“Four years is not eternity. It is a short duration of only 48 months. Those fanning the embers of disunity and beating the drums of war should not flee the country when trouble starts. They should not attempt to ferry their own children out of the country when the trouble they are trying to promote starts,” he added.

He argued that, “In fact, they should be advised to bring their own children who they are keeping abroad to come home to fight. Nigeria at centenary is at a cross-road. The pendulum of activity is oscillating between peace and impending war.”

“President Jonathan represents peace and his distractors, who are crisis promoting agents, represent war. So the choice is now left for Nigerians. I am very convinced that they will make the right choice, that is the path of peace.”

The ceremony was attended by youths from the six geopolitical zones of the country as well as the Political Adviser to the Vice-President, Mallam Abba Dabbo and National Woman Leader of the Peoples Democratic Party, PDP, Dr. Kema Chikwe, among others.