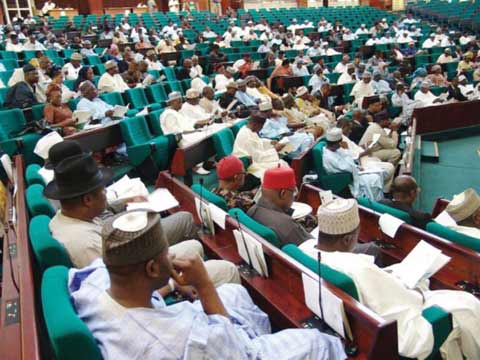 Internal crisis rocking the ruling Peoples Democratic Party PDP, a calculated subterfuge by All Progressive Party APC among other interests which created a hostile political environment were reasons why President Goodluck Jonathan could not present the 2013 budget to the National Assembly on Tuesday, a source in the lower chamber has said.

Impeccable source told Newsinvestigators that Jonathan was advised to suspend the Tuesday presentation at the last minute because of the dramatic turn of event at the House in which the leadership could no longer guarantee a soft landing for the president during the presentation.

“The presidency was aware of the plan by some members to create confusion. the idea was to embarrass Mr. President  by booing him,” the source said. The source explained that there were three major interests that are opposed to the  president in the lower chamber.

“Members loyal to the G-7 governors are in the same category as loyalists of the Baraje faction and are not happy with the treatment melted to Baraje when he came to the House, some of them want to have their own pound of flesh,”  the source hinted, explaining that the scenario already palyed out at the caucus meeting of PDP held on Monday in the House.

“There is also the APC factor as well as the general discontentment over the constituency budget issue. so, and when it comes to that, who will listen to the speaker when we know his interest was already taken care of,” the source volunteered further.

The source who pleaded anonymity dismissed the president reason of lack of agreement between the two chambers on the oil benchmark saying the Finance and Appropriation Committees two chambers at a joint meeting with the ministry of finance and other stakeholders have agreed on the Senate position of $76.5o benchmark in the Medium Term Expenditure Framework MTEF and the the objection raised by APC leader, Mr. Femi Gbajabiamila was a decoy to allow the convergence of the interests against Jonathan at this point in time.

President Jonathan for the second time in two weeks refused to show up at the annual budget presentation where he was scheduled to lay the 2014 Appropriation Bill before the joint session of the National Assembly as required by the 1999 Constitution.

This was the second postponement of the ceremony, the first being from 12th to 19th November 2013 when he cited the need for further consultation on the MTEF as reason.

Jonathan, who said the current scenario playing out in the parliament made Tuesday’s re-scheduled presentation not feasible, also added that he would still wait for the lawmakers to reach a new date.

He said he could only present the budget proposal only if the two chambers harmonise their positions on certain areas of the budget.

But he however noted that the new date should come in shortest possible time from the National Assembly.

The president’s position was conveyed in a letter he wrote to the National Assembly on Tuesday and read by Speaker Aminu Waziri Tambuwal at about 11.30am.

Jonathan’s scheduled visit to the parliament before it was aborted few minutes before 11am was planned for 12noon.

In the letter, Jonathan told the lawmakers that he was not ready to present the budget before the lawmakers until they put their house in order.

He specifically cited the dichotomy in the Medium Term Expenditure Framework, (2014 MTEF) just passed last week by the two chambers.

The president raised concerns that while the Senate passed $76.5 per barrel, the House passed $79 per barrel.

Jonathan had initially proposed $74 per barrel as the oil benchmark in his communication to the parliament.

The letter dated yesterday reads; “You will recall that I had written to the National Assembly to present the 2014 budget on Tuesday 19th November, 2013. However, considering the facts that whereas the distinguished senate has approved the Medium Term Expenditure Framework, MTEF based on the benchmark of $76.5 per barrel, the honourable House of Representatives has used a benchmark of $ 79 per barrel”

“It is infeasible for me to present the budget in the absence of a harmonised position on the MTEF. In this circumstance, I find it necessary to defer the presentation of the 2014 budget to the joint session of the National Assembly until such a time when both respective chambers would have harmonised their position in the MTEF. It is my hope that this would be in the shortest possible time”

Meanwhile there were indications Tuesday that Jonathan’s decision not to show up in the ceremony may have stemmed from security concerns.

It was gathered that the anti-Jonathan elements in the House of Reps were hatching plans to embarrass him during the visit.

Ploy of the lawmakers especially those loyal to Usman Baraje-led group of PDP was said to shout down and boo the president while making his presentation.

Young members of the group from the states under the G7 governors and those from All Progressives Change, APC in South/West states were said to have assigned to do the shouting match.

Informed sources said repeated efforts by Tambuwal in the last few days to stop the group failed through holding of several night meetings.

The development which later led to an emergency PDP caucus Monday night still met a brickwall.

Those at the meeting held under a closed door situation said Jonathan’s loyalists in the House eventually drew a battle line with Tambuwal and the Baraje lawmakers.

It was later resolved that since the Baraje group could scuttle the president’s visit, option of telling Jonathan not to come was arrived at.

Also gathered was the fact that leadership of Bamanga Tukur-led group passed the tip-off to the president.

Meanwhile spokesperson of the House Zakari Mohammed yesterday denied the allegation of likely unruly behaviour of his colleagues towards Jonathan.

At a press conference shortly after the cancellation of the visit, Mohammed said members of the House are too mature for such unruly behaviour.

He said having brought the budget in 2011 and 2012 with harmonization of MTEF between the two chambers, there was no excuse for Jonathan to bring up the current excuse.

It was resolved at the meeting that the caucus would resist any move by Jonathan to pass the budget to the National Assembly by proxy.

The APC lawmakers said they were ready to give Jonathan a new date rather than sending the document to them.