By Tom Garba, Yola – A 19 years old girl who identified herself as Mumina Alhaji Hamidu was rescued by the Adamawa command of the Nigerian Security and Civil Defence Corp (NSCDC) from the custody of Boko Haram insurgents. 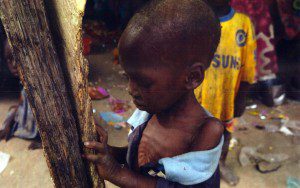 According to her, she was abducted by the insurgents over three years ago from Mubi town, forcefully married to one of her abductor by name Abubakar Banakura and now nursing an eight-month-old baby boy which she gave birth to in Sambisa Forest.

While addressing Journalist in Yola Friday, the Commandant of the Corp, Aliyu Ndanusa said the victim was rescued through an intelligence reports by the Command Personnel’s and was brought to state headquarters.

He said the Command has spread its personnel across the 21 local governments in the state to ensure peace and security.

“Our personnel operation in Mubi recused her on the 8th of this month, she was abducted by Boko Haram terrorist in Mubi in October 2014, but managed to escape from Sambisa to Cameroun, she was rescued on her way to Mubi by personnel of the Corps and brought to Yola the state headquarters”. He stated.

Ndanusa said the Corps is trying to rehabilitate the girl from psychological trauma she has passed through in the hands of the insurgents, as well as integrate her into the society.

Ndanusa said the rescue of the victim brought to three the number of persons rescued and arrested by the command from January to date.

Mumina who hails from Kasuwar Borkuno in Mubi-South local government pointed out that she was held in captivity by the terrorist for two and half years, adding she was encouraged to escape through Cameroun border by her friend called Aisha.