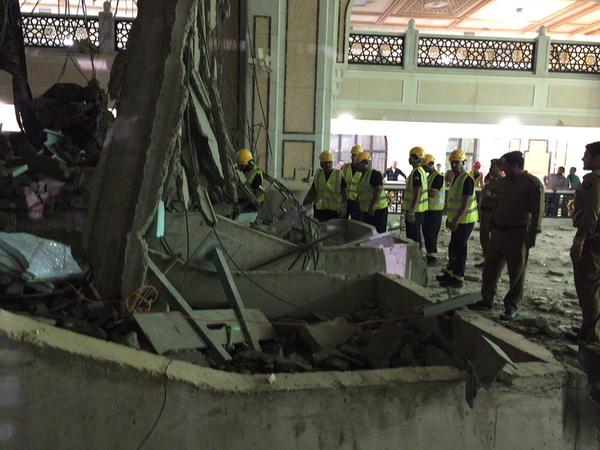 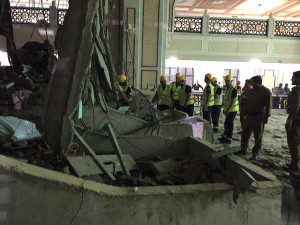 About 65 people were killed and more than 184 injured when a crane crashed through the ceiling of the Grand Mosque of Mecca amid high winds and thunderstorms today.

The tragic incident in Saudi Arabia occurred shortly before the 6:30pm Friday evening prayer session – one of the busiest times of the week – causing devastation to what is the largest mosque in the world.

Al jazeera reports monitored in Abuja said hundreds of thousands of Muslims were gathered at the holy site from all over the world for the annual hajj pilgrimage set to begin later this month.

Pictures taken before today’s disaster show the fatal crane being struck by a bolt of lightning and authorities are in little doubt that extreme weather was to blame.

Earlier, the Civil Defense had issued thunderstorm, heavy rain and wind warnings in the area. Authorities say search and rescue teams and medical workers from the Saudi Red Crescent are now working at the scene.

The Grand Mosque, or Great Mosque of Mecca, is the biggest mosque in the world and surrounds Islam’s holiest place, the Kaaba, in the city of Mecca.

The mosque is usually at its most crowded on Fridays as it is the Muslim weekly day of prayer, when Muslims face in the direction of the Kaaba while performing their obligatory daily prayers.

One of the five pillars of Islam requires every Muslim to perform the Hajj pilgrimage at least once in their lifetime.

Muslim faithful from about 160 countries converge on the Islamic city and other locations in western Saudi Arabia to complete the holy journey.

The pilgrimage, one of the largest religious gatherings in the world, has been prone to disasters in the past, mainly from stampedes as pilgrims rushed to complete rituals and return home. Hundreds of pilgrims died in such a stampede in 2006.

Saudi authorities have since lavished vast sums to expand the main haj sites and improve Mecca’s transportation system, in an effort to prevent more disasters.

Security services often ring Islam’s sacred city with checkpoints and other measures to prevent people arriving for the pilgrimage without authorization.

Those procedures, aimed at reducing crowd pressure which can lead to stampedes, fires and other hazards, have been intensified in recent years as security threats grow throughout the Middle East.

Last year, the kingdom reduced the numbers permitted to perform haj for safety reasons because of construction work to enlarge the Grand Mosque.

Al Jazeera’s Hasan Patel, reporting from Mecca, said witnesses told him that a crane fell on the third floor of the Grand Mosque around 5.45pm.

Our correspondent said the mosque was packed, even though the incident happened shortly before the 6.30pm prayer.

‘Dozens of ambulances are heading to the site. The authorities closed off the area shortly afterwards,’ he said.

‘This whole place is already a construction site. What made it worse is that around 5.30pmthere was severe rain and it’s just gushing down the road,’ he said.

‘I am surrounded by people who are grieving. The mood here is of sadness.’